At my home, the only thing that's “home automation” is a set of Hue light bulbs I use as a wake up light and to illuminate the flat as I arrive on a dark evening. This is quite nice and works okay-ish (I have issues with the geofencing every now and then, though) but since my flat is very small, has a very simple heating system and no other big automatable challenges, I have no desire to bring more automation in.

In my new studio (rapidly approaching a one year anniversary) the situation is different. I don't have any desire or need to actually automate the lighting, but there are a couple of things with the electrical wiring that made me think of doing at least tiny bits of automation.

For example, since two weeks now, I started to work on a dashboard – I have a RaspberryPi 3B+ as the driver and a cheap HD screen as the display. It displays a variety of different data, including Updown status of a few web apps, some personal “quantified self” stuff, status of my 3D Printers etc.

But of course, it would be madness to run the dashboard 24/7 when I'm not in the building. But keeping in mind every evening to switch off the dashboard is sort of tedious. And while in my experience Raspberry Pi's and the underlying OS are extremely good at handling power cutoff and cold restarts, you probably still want to gracefully shut them down before cutting the power, making the process even more tedious.

Now of course, here things get interesting because we went from “managing a few wifi power outlets” to “be also able to shut down a raspberry pi from afar” and of course none of the commercially available automation systems (mostly based on crappy apps) actually do allow you to ssh into a different machine and run shutdown -h now.

In my research, of course I quickly stumbled upon OpenHAB, and started to play around with it. In my search for a cheap and easily integrated power outlet, I then found Tasmota, an open firmware for a specific class of devices all based around the same specialised microcontroller, the ESP8266, which would make it really easy to integrate into OpenHAB. The missing puzzle to actually get me motivated to start for real was Tuya Convert, a project that allows you to flash specific ESP8266 devices (based on products of a company called Tuya) without having to open them up to solder some serial connection on. After a bit of searching for the best option, I settled on the Gosund SP1, which is sold in practical 4 packs for around 30 EUR at the evil quasi-monopolist (don't @ me). The flashing process is quite straight forward and I did it all from my RaspberryPi 400. 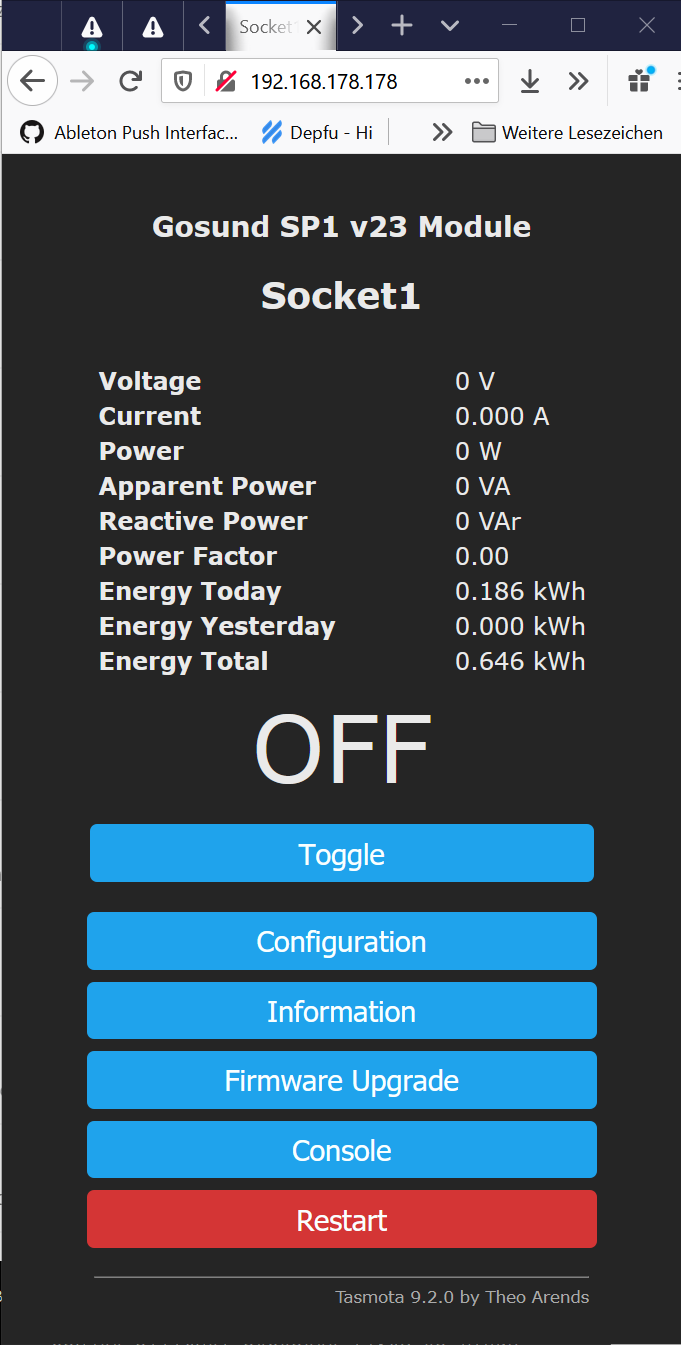 Configuring OpenHAB is a daunting task and parts of me want to replace this with a much simpler system I can code up in a few minutes in Ruby, but there are benefits to be had from a system that has such a large community and has bindings for practically everything. 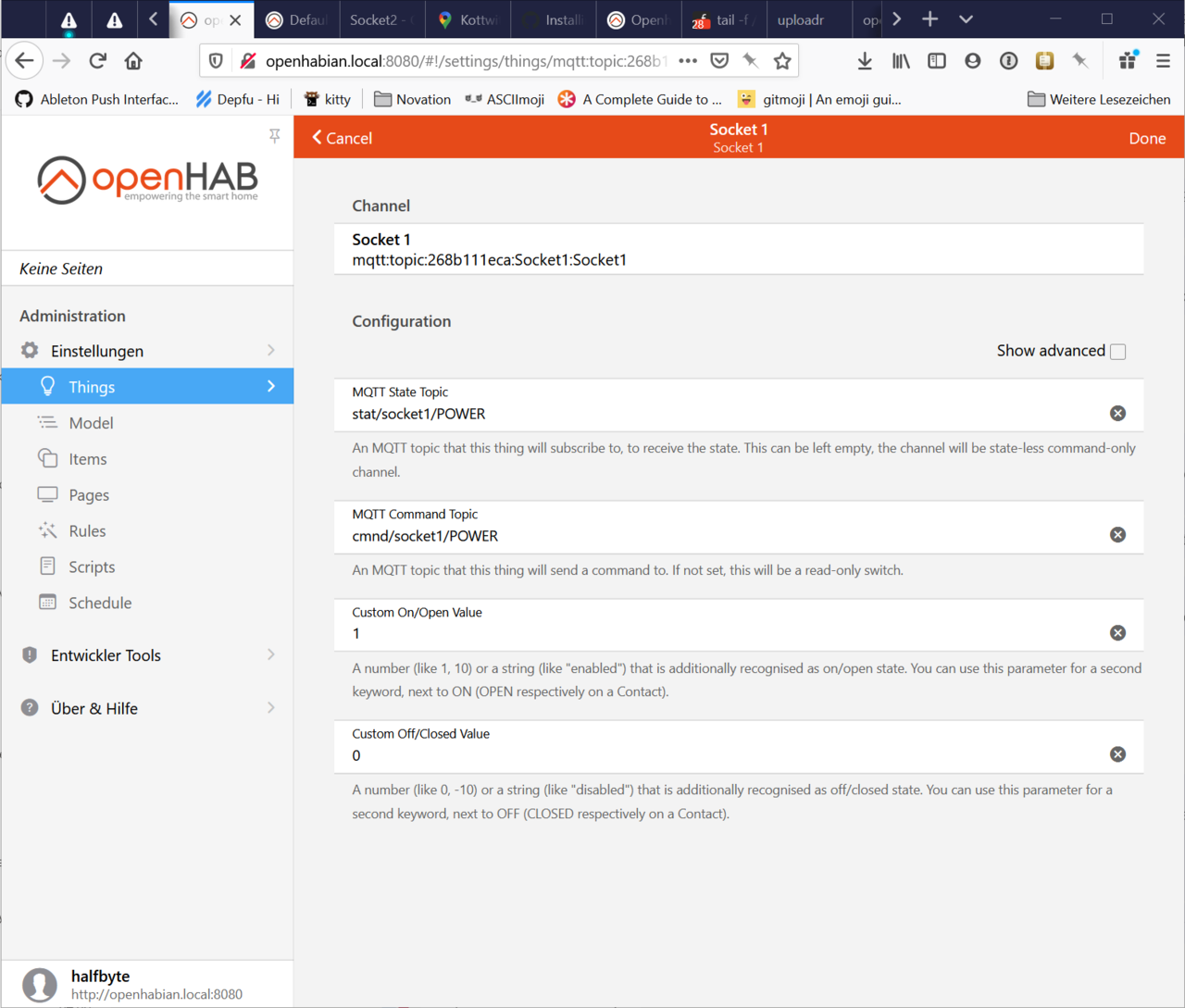 OpenHAB runs great on my brand new Raspberry Pi 4 and has been a lot of fun to configure and try to get some more elaborated schedulings and stuff working. 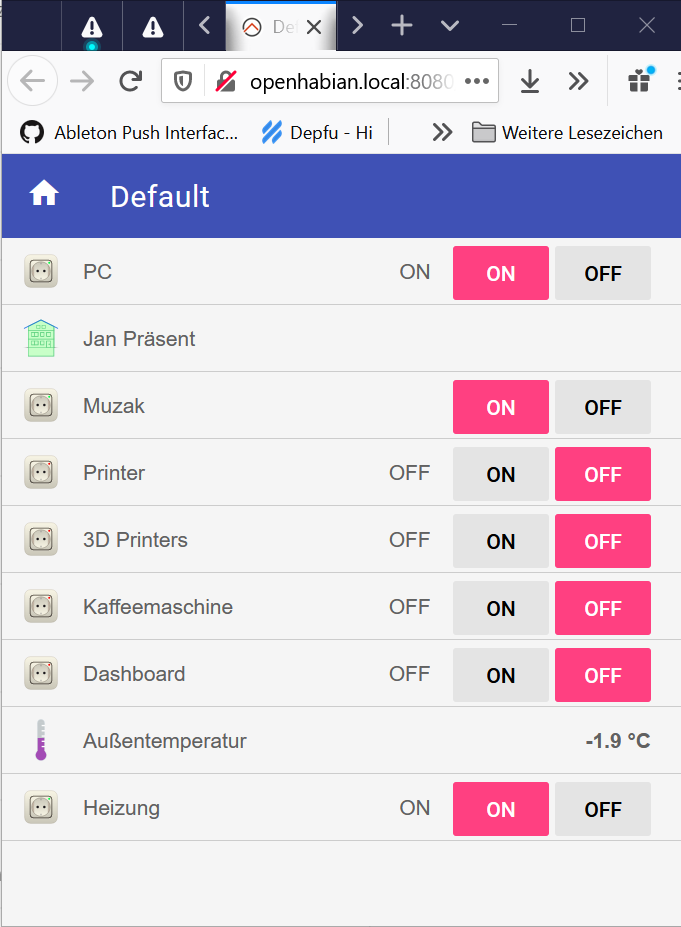